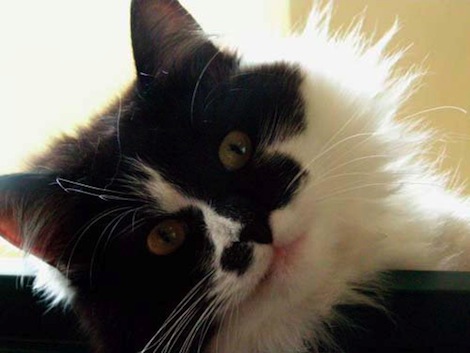 Our beloved cat, and the hero of the story told below, passed away in the arms of witnesses after being hit on a road nearby our house.

He was a source of joy, comfort and strength during his short time with us, and his passing has left a hole in our lives that feels like it will never be filled.

Thank you to everyone who helped in the search and in getting the message out there, if it weren't for you we might never have known. This is not the ending we were hoping and wishing for.

We miss you so much

A true story of a cat, a bottle of V and forensic science

A couple of months ago, in a quiet Wellington suburb...

I returned home from lunch, opened the front door and — to my confusion — heard the sound of the refrigerator alarm. I assumed I'd left it open accidentally, but when I walked into the lounge my heart sank. The back door was open and our stuff was lying everywhere.

It was clear we had been burgled; the losses included a laptop, a camera and a variety of other electronics. After quickly ensuring the offender had gone, I notified the police and set about trying to clean up as best I could without damaging any potential evidence. It was then that I discovered why the fridge was open...

The bastard had stolen my last bottle of V

This was the last straw. It's one thing to steal a whole bunch of well-used (and well-loved) gear; it's quite another to run off with the last bottle of my favourite sugary beverage as well.

Unable to leave the house, I shared my woes with the internet and the first of three miracles occurred. A knock at the door a short time later brought me out from my hastily constructed fort in the bedroom to discover a grinning friend, who handed me an enormous box of V bottles. As I was standing there holding them in astonishment he smiled wider then wandered off nonchalantly. For the first time since the burglary things were looking up. 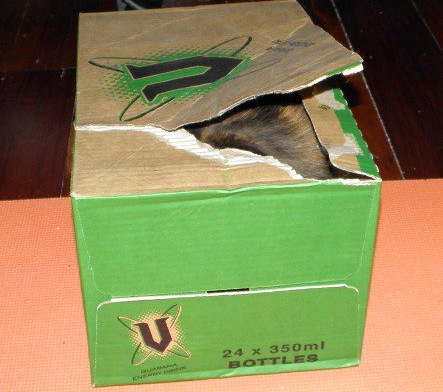 I liked the V box full, Stellar preferred it empty

It's one of those curious things, that when a horrible thing happens to you, you often feel lucky that it wasn't even more horrible. In just this way, we too were lucky. Of the things that were stolen, everything physical was easily replaced. My wife, a photographer, tragically lost many photos stored on her laptop but that was about the size of it really.

Now, however, our luck ran out. Early the next morning a senior constable from the Police arrived with a crime scene kit and began carefully checking the house. Given the gymnastics the burglar had to execute in order to get in through the tiny window we figured some good strong fingerprints were a given.

It was not to be. Some time later the poor constable left, carrying evidence bags with a few scraps of paper he hoped to have analysed in case there were prints on them, but no other area had revealed any useful prints and chances were looking slim.

With nothing better to do, I decided that carrying all that gear in broad daylight (he stole our backpacks for the purpose) may have been tricky, and that perhaps the offender might have stashed them somewhere nearby in order to return later. Ok, it was a long shot but the need to do something in these instances is almost overwhelming, even if the something in question is almost certainly a waste of effort. And so I began a circuit of our neighbourhood.

When you first begin such an exercise, you are very diligent. You look in bins, under benches, behind trees, in bushes. Eventually you get tired and only something particularly distinctive will catch your eye. It was while idly looking around that I looked down a bank and discovered something: our cat.

We have two cats, Stellar and Squeaky. Stellar is the stay-at-home type but Squeaky, a fluffy black and white Siberian, is a friendly adventurer with the opinion that conflict with anyone is a waste of effort since they'd be much wiser spending their time admiring him and serving his every need. 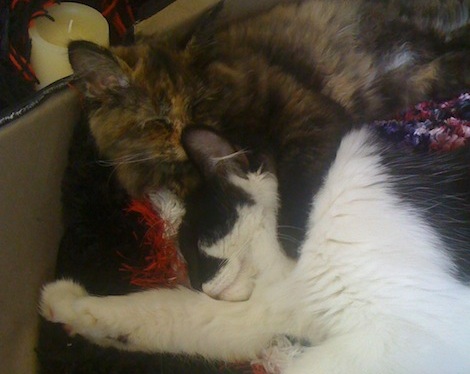 It was this admirable cat that caught my attention, because as usual he was looking cute. Non-cat people don't understand this, but for cat people, almost every sight of a cat is like a paralysing sunbeam, requiring immediate attention (This is why the internet is full of photos of cats).

As I was admiring Squeaky, I noticed that he was in fact sitting next to something. 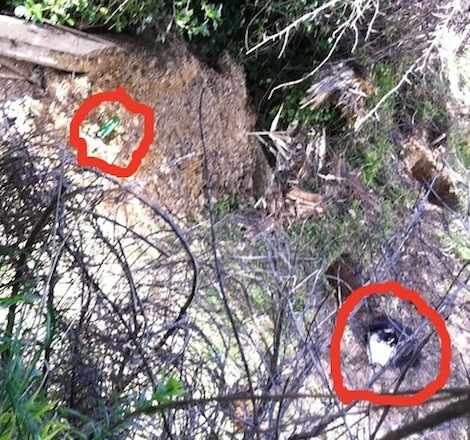 The detective breaks the case

Just as a coffee drinker can detect the smell of coffee at 50 paces, V drinkers can spot a V bottle with a precision that puts world-champion Where's Wally readers to shame. This, this was a V bottle!

I hurried down to the location, and on the way discovered more evidence: flight tags ripped from our backpacks, making it almost certain that this V bottle was in fact the bottle taken from my fridge. My last V bottle! Found thanks to (recently promoted to Detective) Squeaky, who took his reward in pats and kibbles as usual.

A hurried call to the senior constable, and the V bottle was carefully retrieved and placed in an evidence bag. The constable said he would apply to have it tested for DNA. None of us thought this would come to much, but it was a big step up from nothing.

We had plenty to do: insurance to sort out, windows to get replaced, various preventative measures to apply. Time passed, we didn't hear much. And then I got a call, from a rather pleased-sounding Police officer.

They got a DNA match.

Even those of us who watch CSI know that it's all rather fake. The chances of getting a DNA match in Wellington, New Zealand, for a relatively minor burglary are so small as to be basically science fiction. And yet it happened: they got a good match, and for a known burglar no less!

Some time and a trial later, our burglar pled guilty and received a one year jail sentence. It was an astonishing outcome given that we had been resigned to never finding out who did it, an outcome only possible thanks to brilliant detective work by a cat! 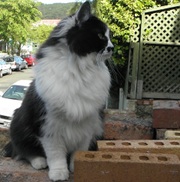 During the search to find Detective Squeaky many many people helped our cry for help reach across the city and the internet. It was thanks to all of you that witnesses to his death were eventually able to get in touch with us. We cannot thank you enough.

There are a few people we would like to thank especially:

I have no doubt forgotten people, and there were others who went to enormous efforts we may never know about. We appreciate it all, so so much. 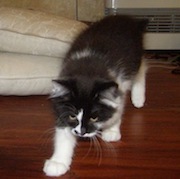